Hi everybody - I've streamlined this blog, so if you're a new visitor and want to see an overview of my work, click on the 'GALLERY' tab, above. If you're a regular, continue to scroll down this page for the latest Alexi K news. - Thanks!
Posted by Alexi K at 02:45

Two of my Homage to Hokusai paintings are currently on display on the island of Paros, in the Cyclades, Greece. Entitled 'Odyssey To The Orient', it is curated by Paulien Lethen, a Brooklyn gallery owner who has converted the beautiful townhouse used by the Paros Art School, into a replica of her residence when she spent several years in Japan.

Below: Green Wave and Blue Wave, as seen in Odyssey To The Orient.
Acrylic on canvas, 100cm x 100cm 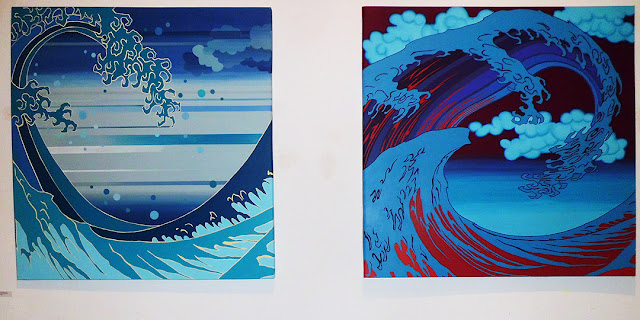 A short documentary about the waves can be seen here:

And here's my rather shaky tour of the show itself. It was a hot night, and people are pretty much drowned out by the crickets at one point, but hopefully you'll get an idea of the beautiful house and its rooftop view. I made a lot of great friends on this trip, and met some fantastic artists, some of whose work you'll be able to see in this clip:

Odyssey To The Orient runs until 31st August 2012, in Paroikia, Paros: